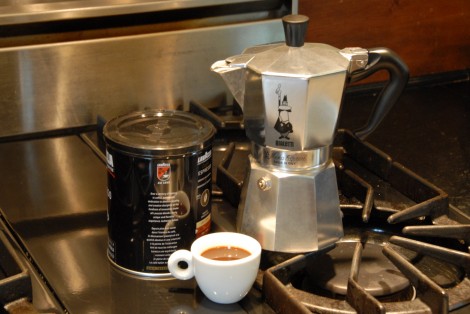 I need to get this out there. For 25 years I have had an on-again, off-again relationship with a hot little Italian. You’ve probably seen her; hour-glass figure, angular good looks. We have had an international fling, fun at times, disappointing at times, but we keep meeting back up at different stages in our lives.

Before anyone feels the need to email my wife, I’m speaking (of course) about the Bialetti Moka Express, the iconic Italian stove-top coffee maker.

I first met Bialetti when I was in college, when I bought one for a friend as a thank you gift for letting me crash at his house for a while. We made ‘espresso’, and read ‘newspapers’, and discussed the ‘important events of the day’ (events far more important than those since, or before for that matter) around a little kitchen table in Austin, Texas. I understand now that the Moka Express, despite that promising last name, doesn’t make espresso – or even expresso. But at the time it was espresso, and so very Italian; more Italian than we knew. Eventually I would become disenchanted with Bialetti. I would start going out for coffee, to cafes and coffee shops where they had big Faema machines and tables full of language professors, and ex-pats, and underground cartoonists all smoking French cigarettes, and I would have real espresso. Suddenly that fake espresso of the Moka Express didn’t seem so significant or worldly. It seemed a bit of a lie, a pretense, perhaps even an affectation.

Despite our growing distance, Bialetti did make the trip to Wales with me, but she was soon bored. I couldn’t buy real coffee, particularly not anything resembling an Italian roast, in my little town and this was years before something like Amazon would arise to save us from the constraints of our geography. I think she may have stayed in a box the whole time, although the weather was so bad and the winters so dark that it would have been hard to tell the difference. And then, like a cad, I left Bialetti behind when I journeyed overland to her home country.

When I got to Naples, everyone knew Bialetti (in actual fact, 90% of Italians homes have a Moka Express). Here, in the home of espresso, people loved Bialetti. So, it wasn’t espresso. Who cares? Chi c’e’, c’e’.. chi non c’e’, non c’e’. The Bialetti was, and still is, the way people made coffee at home. Big shiny espresso machines were for cafes and bars. The Bialetti was a homebody, cranking out pot after pot of ‘moka-pot coffee’. Nobody I knew had a coffee grinder. No one was seeking out single origin, estate grown, locally roasted coffee beans. Kimbo was a local favorite, as was Lavazza, bought pre-ground in plastic vacuum-pack bricks. Sometimes heated (not frothed) milk was added, mainly at breakfast, or perhaps for the infirm. Often the first drops of coffee to sputter forth from the Bialetti were ‘creamed’ with the sugar for the whole pot, to give a sort of pseudo-creama to the coffee. But always, at people’s homes, the little Bialetti was happy to entertain.

I began to understand that my earlier disappointments with Bialetti were about me and my expectations, not about her. The Bialetti never claimed to make espresso. That last name of Moka Express wasn’t intended to deceive, it was just a little linguistic foible, charming, really, in retrospect. For two years I made coffee with the Bialetti; at home, at friends houses, even out on the Mediterranean, sitting in the sun, happily brewing away with the aid of an old Coleman stove balanced on the stern of a boat.

Still, I left Italy not with the faithful Bialetti, but rather with a medium sized, lever action Pavoni carefully packed away with a Capodimonte espresso cup set, and the rest of my belongings. The Pavoni was a serious espresso maker, after all, with a pressure gauge and a portafilter. Making espresso with the Pavoni was a sort of art, much more than a science. Grind the coffee too finely, and the lever wouldn’t pull down and you would have to let the whole thing cool down for an hour before you could start over. Grind the coffee too coarse and you would get a bitter, thin cup of coffee. Because of the hassle and danger of a bound up machine, I made many bitter, thin cups of espresso.

I progressed on past the Pavoni, although it still sits in my basement, awaiting the day that I send it to Thomas E. Cara, LTD in San Francisco for a complete overhaul. I moved first to a Francis!Francis! X1, because it was modern and could use ‘pods’ of some sort and had a pump. Those little pods, by the way, are a terrible idea. Stale, pre-ground coffee wrapped in thick paper. It’s like drinking left over coffee through a newspaper. I ditched the pod adapter, and things were a little better. Finally I moved on to my ‘forever’ machine, a Giotto Rocket, a big chromed chopper of a machine with gauges and steam wands and water spouts galore. Most importantly, the Rocket features a Faema e61 style brewing head, a full kilogram of chromed metal that heats up and stays hot.

So, as I pursued espresso perfection at great time and expense, spared nary a thought for Bialetti. Sure, I had some fond memories, but those days were past. I had fancier, more exciting coffee machines to occupy me.

That is, until, a couple of years ago, when I found myself in a beach house in Vieques, Puerto Rico. I spent a couple of mornings desperately trying to coax a drinkable cup of coffee out of a German automatic drip pot of some sort – a Braun or a Krupps – with no luck. Then, I found her, the Bialetti. She was stuffed into the back of a cabinet, behind some mismatched stainless pots and lids, forgotten and neglected. If you want fine German machinery, get a sports car. If you want great coffee, go Italian. A quick trip to the market for some Puerto Rican pre-ground coffee, a quick wash, and Café con leche began to flow forth from the kitchen. I was relieved to have a decent, make that excellent, cup of coffee – as were our guests.

The Bialetti had crossed the ocean once again, and found her place in the sun. I really hope she’s happy there.

I plan to visit again soon, and we’ll see how it goes.

Here is a video, with a much more straight forward review and demonstration of the Bialetti Moka Express

8 thoughts on “My Affair with Bialetti”