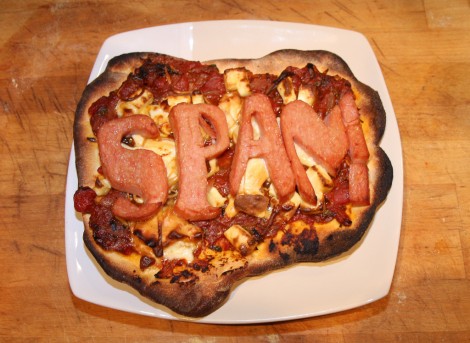 Image Credit: Jerry Pank, who both photographed and created the Spam pizza.

As a new little WordPress site, I get my fair share of attempted comment spam. It doesn’t really bother me – at least I know the bots are finding me, and it doesn’t seem to throw off my site statistics for some reason. In fact, some of the comment spam is nearly poetic – in a post-modern, dystopian sort of poetic voice. I’m often tempted to approve the comments, just to share the insanity – and because I can’t shake this mental image that there is a boiler room somewhere in Shanghai with 1000 people, endlessly trying to get a comment on a blog so that their links to ‘cheap air jordans’ or ‘special diet pill’ can get posted. I feel bad for these folks, should they exist, and want to toss them a little token – a little success in a dark and joyless existence. Maybe they get paid like piece-work, and each successful piece of comment spam is a Yuan or two.

Then, this morning, I got my favorite comment spam ever. Here’s a little excerpt:

{
{I have|I’ve} been {surfing|browsing} online more than {three|3|2|4} hours today, yet I never found any interesting article like yours. {It’s|It is} pretty worth enough
for me. {In my opinion|Personally|In my view}, if all {webmasters|site owners|website
owners|web owners} and bloggers made good content as you did, the {internet|net|web} will be {much more|a lot more} useful than ever before.

It goes on like that for pages, and pages. It’s the script. Not the script for a human spam-slave, but the script for a bot, a bit of computer code that seeks out and sullies WordPress sites. A bot which is apparently broken, and puked up the script that allows it to randomize comments so as not to be detected as spam immediately.

This is awesome. Both in a “crazy-Snow-Crash-we-are-living-in-the-future” sort of way, and also in a “Now I don’t have to feel bad for the fictional spam slaves” way.

So, no – I’m not going to approve it, as tempting as it was.